We’re constantly updating this page as we find out more about the history of the Perth Broncos and Gridiron West. If you have documentation, newspaper clippings, videos, or photos that we can add to this record of our history, please get in contact with us at info@perthbroncos.com

1988: Founding of the Eastside Broncos and first organised gridiron match in WA

The Eastside Broncos began at Bassendean Oval led by Russel Holland and Gary Jones with approximately 25 players. They won the first organised American football match in Western Australia – an exhibition match against the Southside Seahawks – by a safety 2-0 at Jubilee Oval in September 1988. At the time, there were only three teams – the Eastside Broncos, Northside Chargers and Southside Seahawks. 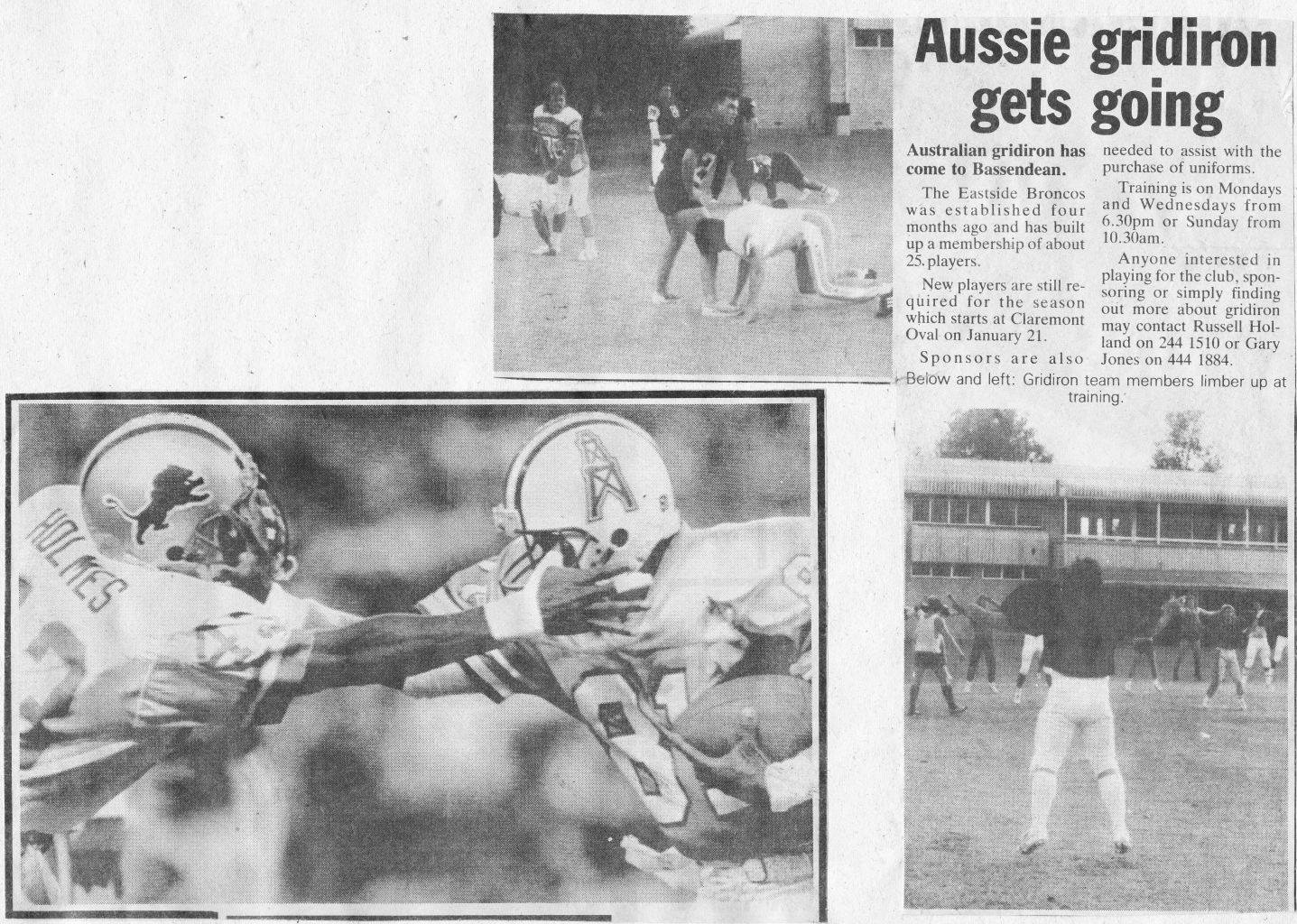 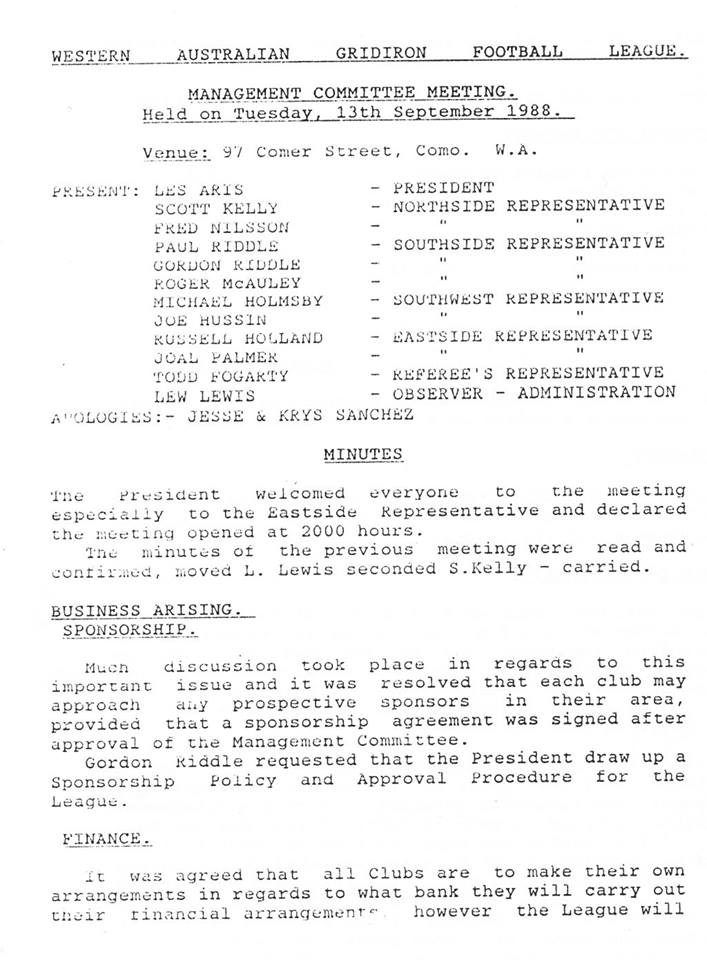 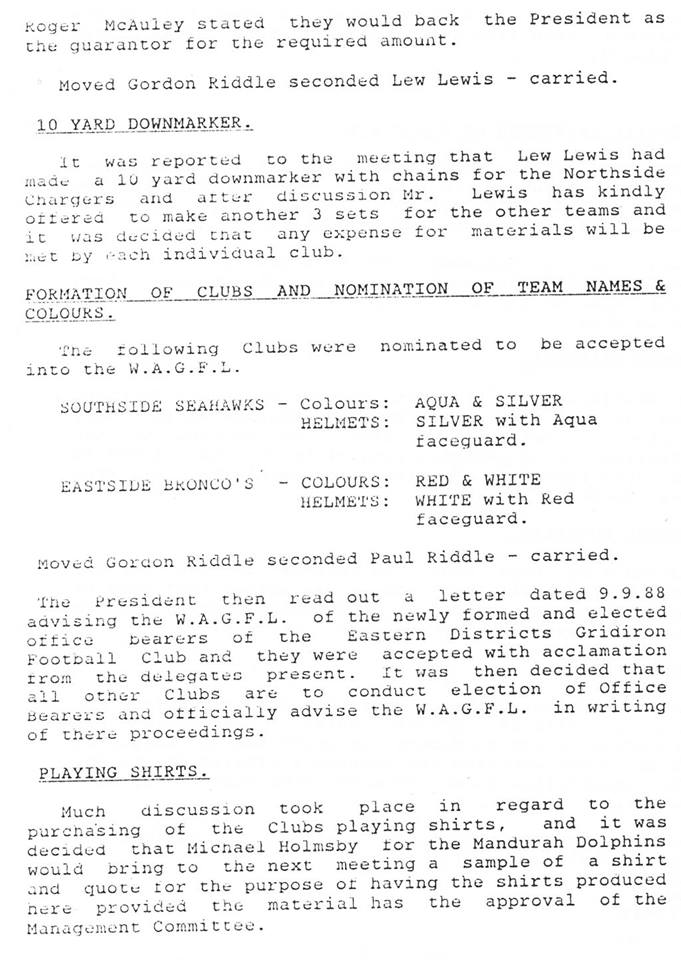 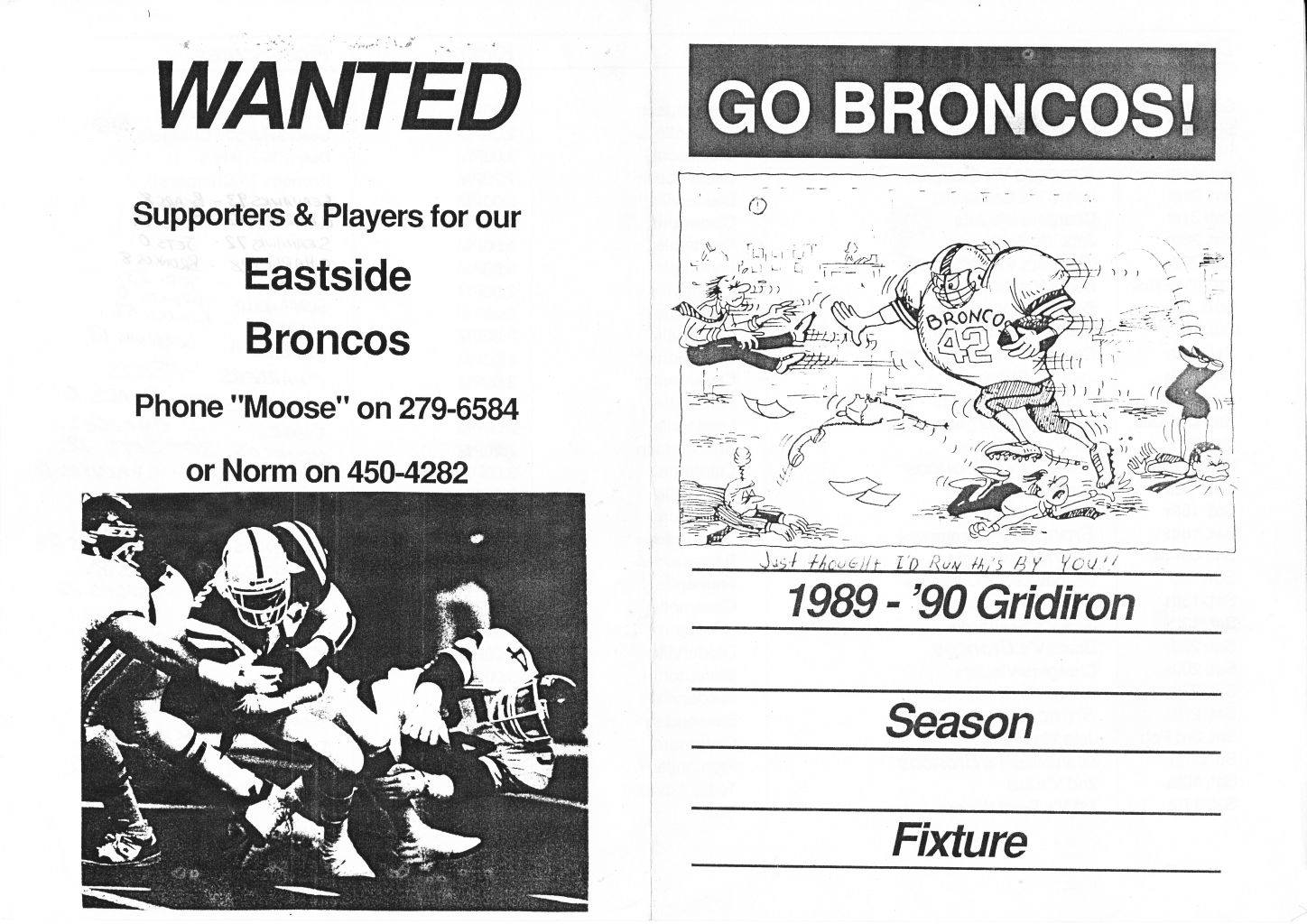 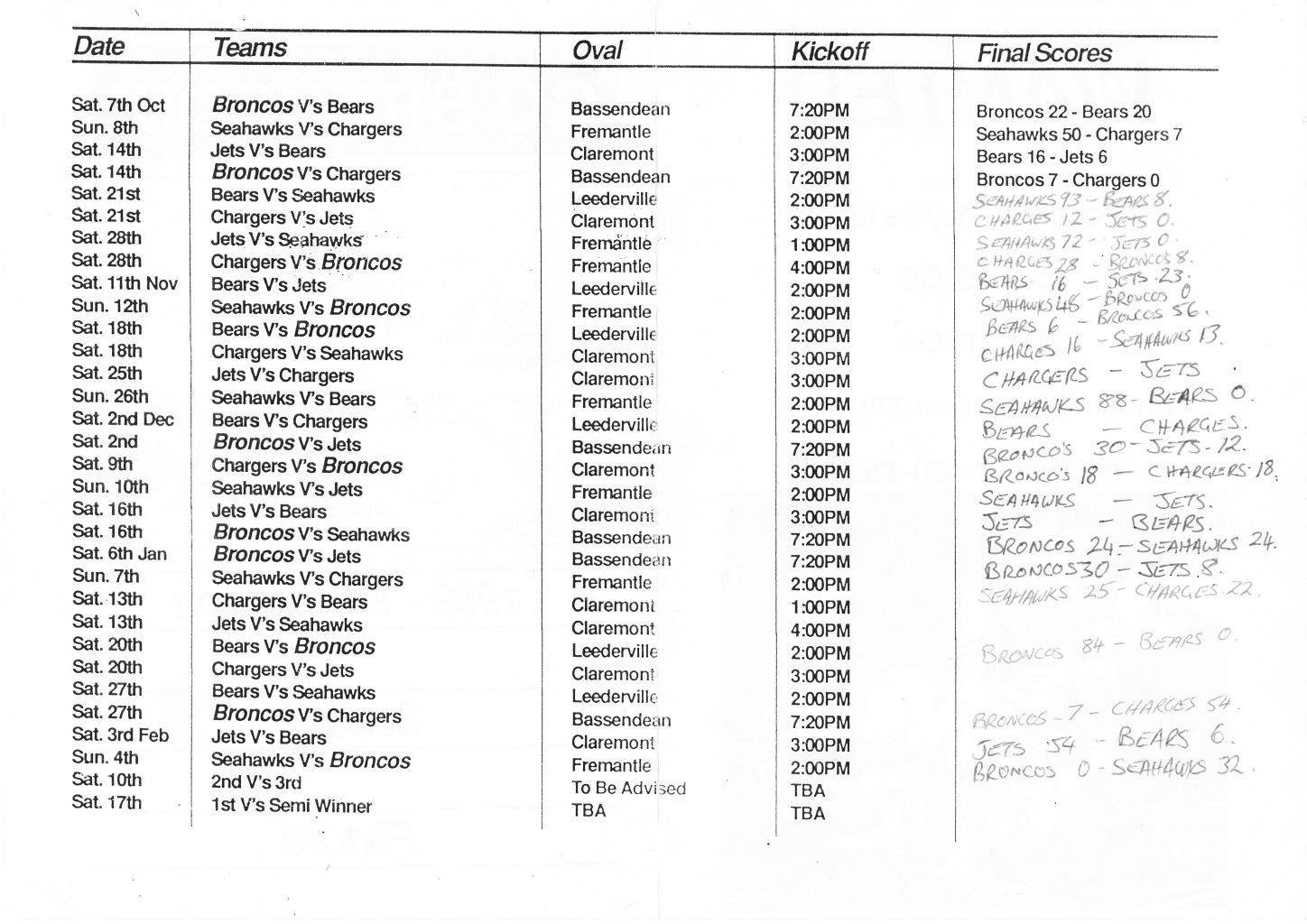 The competition – also known as the WA Gridiron Association – expanded to include the East Perth Vikings. To reflect the geographical distribution of teams, the club became known as the Bassendean Broncos led by club president Moose Jones and coached by Norm Bernard.

That year kicked off the tradition of social events at the club with the Broncos hosting a Super Bowl viewing event where people were invited to bring barbeque packs and tickets were $2 a head.

A Winter season was held in 1990 under lights at Parry Field in partnership with the Perth Baseball League. The newly-formed Westside Steelers defeated the Claremont Jets in the finals. 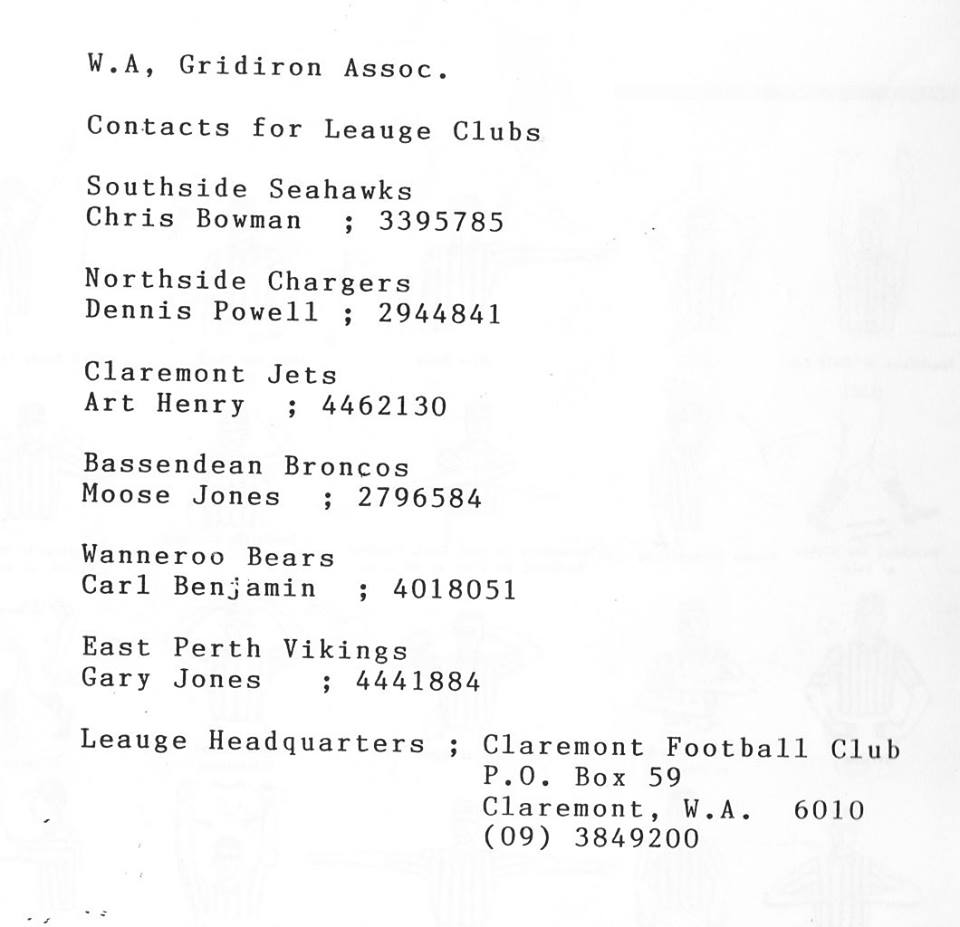 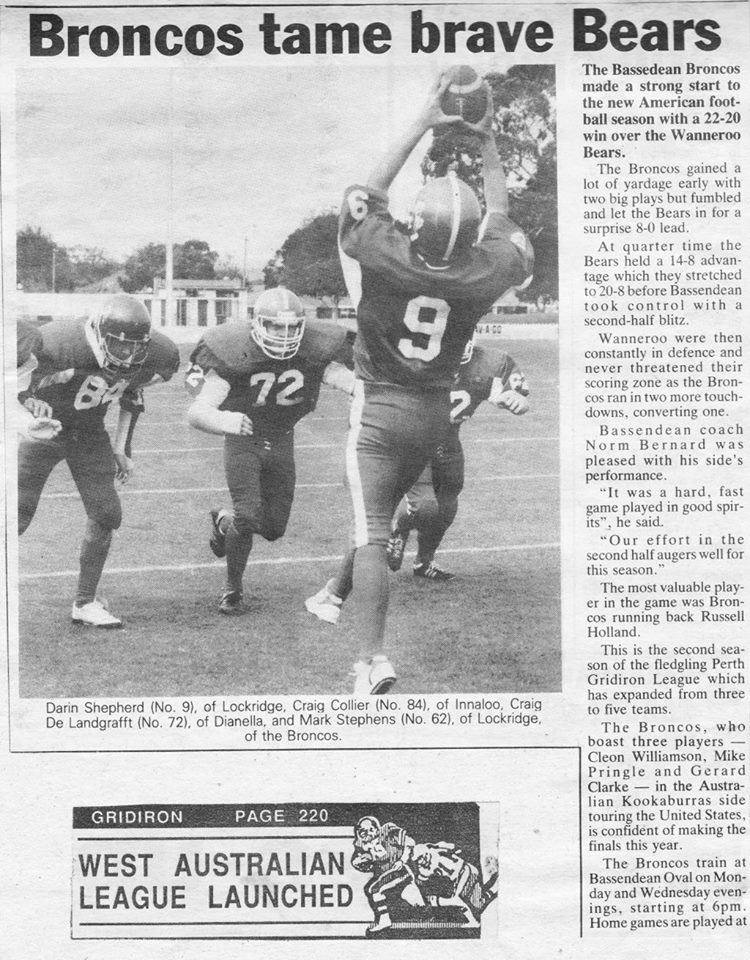 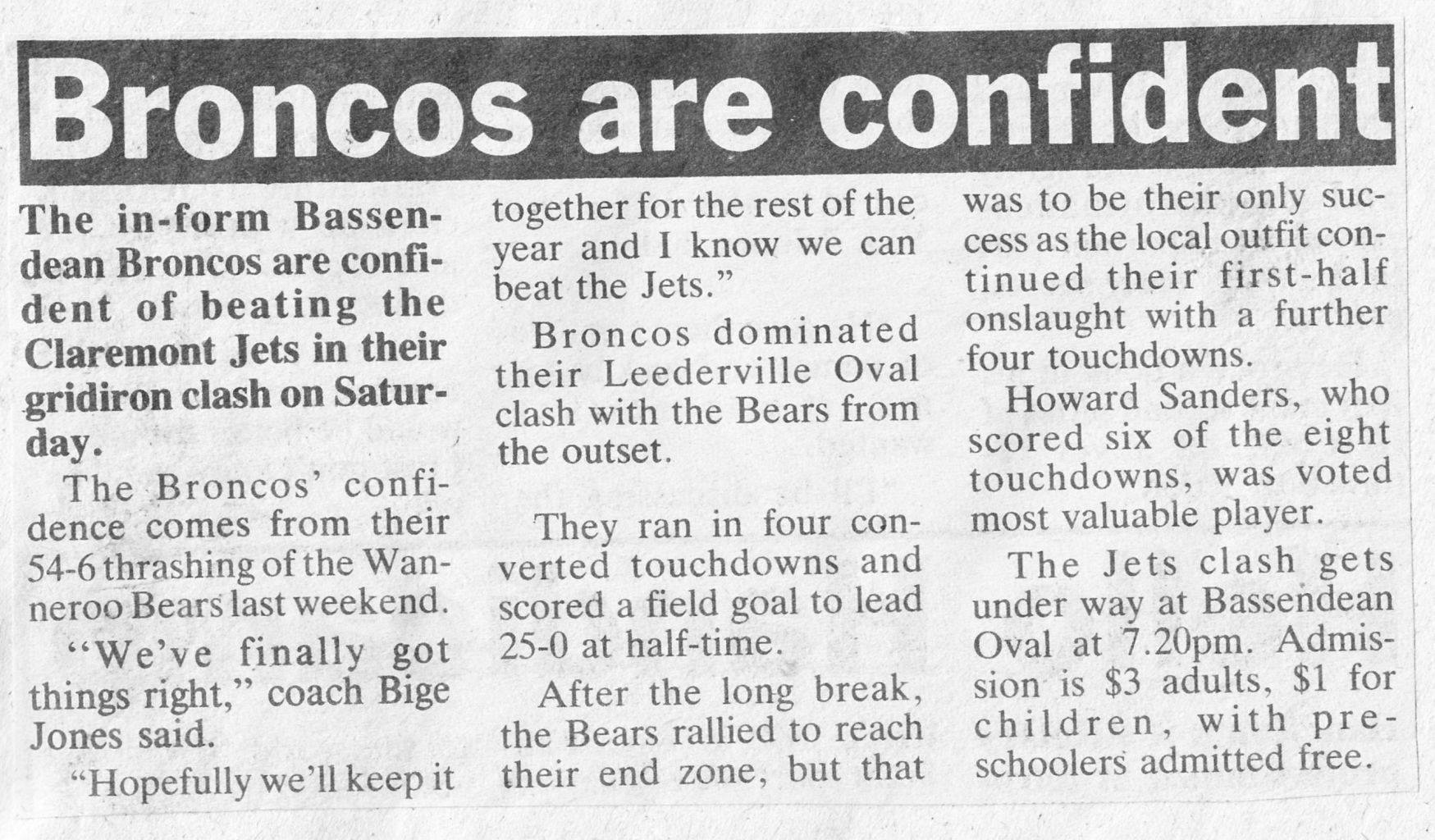 1990-1993: The Perth Broncos and first cheerleading squad in WA gridiron

The Summer season of 1990-91 saw the addition of the South Perth Giants and Mt Lawley Bengals to the league making it a 9 team competition. A deal was struck with Curtin University and the WA Hockey Association to hold games on the astroturf at the ‘Curtin Bowl’. The Broncos formed a partnership with state basketball team the Perth Wildcats with star player Ricky Grace launching the season. Due to this relationship and their participation in interstate games, the club was renamed to the Perth Broncos. Training was moved to Eden Hill and the Broncos went undefeated until a shock upset in the semi-finals saw them lose to the Steelers 21-16. The Steelers went on the defeat the Southside Seahawks in the final.

1991 saw the first release of a club t-shirt that would lay the foundations for the Broncos love for merchandise and future fundraising efforts.

The 1991-92 season saw the league expand to include the Curtin Cowboys. The Broncos debuted a newly formed cheerleading team, with a 27-2 win over the Claremont Jets in their opening game.

In the 1992-93 season, the Broncos moved training to Grand Promenade Reserve in Bedford and picked up former Montana College quarterback Eugene Grajek. They defeated the Claremont Jets 46-6 in the semi-finals to gain their first grand finals berth, where they went down to the Steelers 26-0. 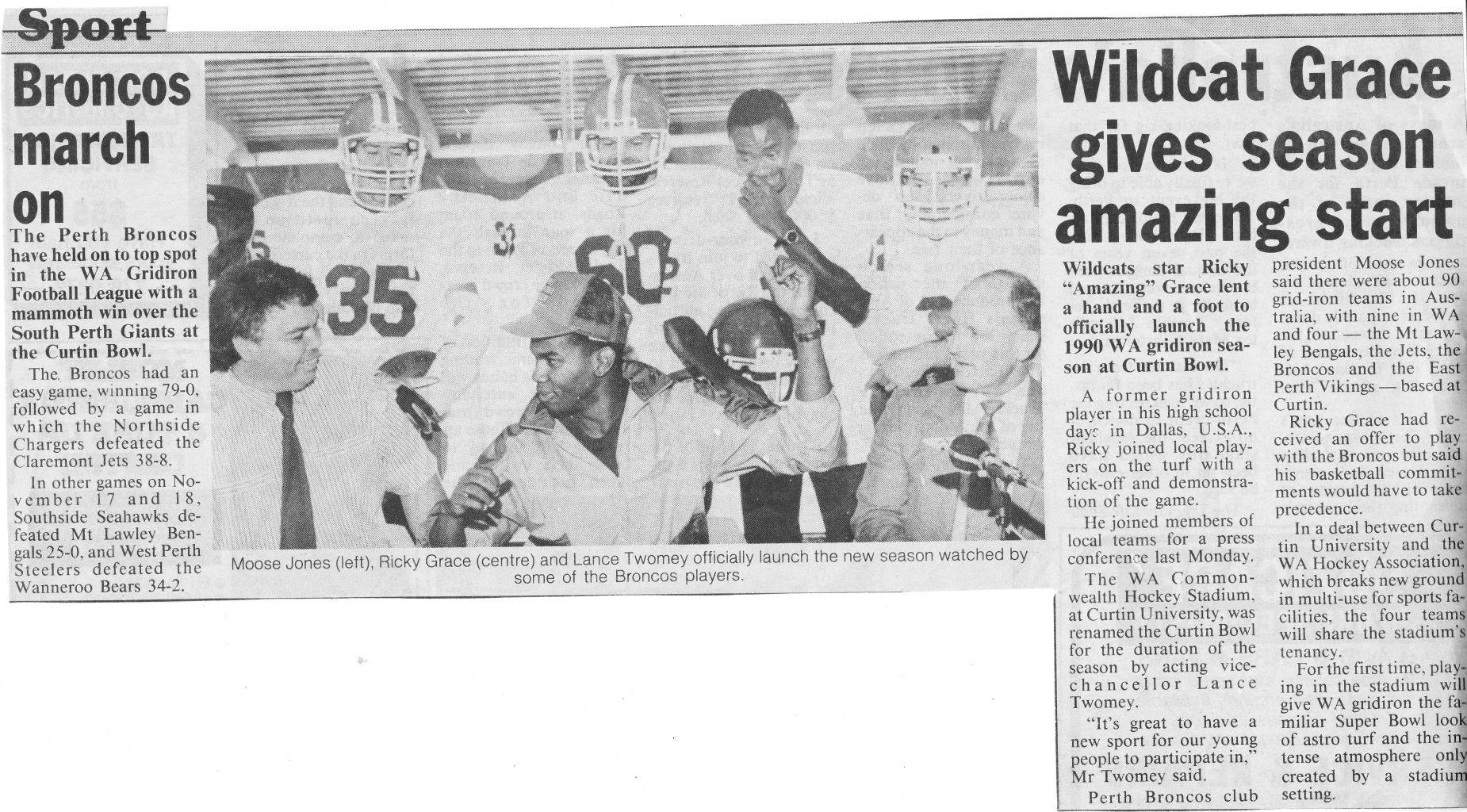 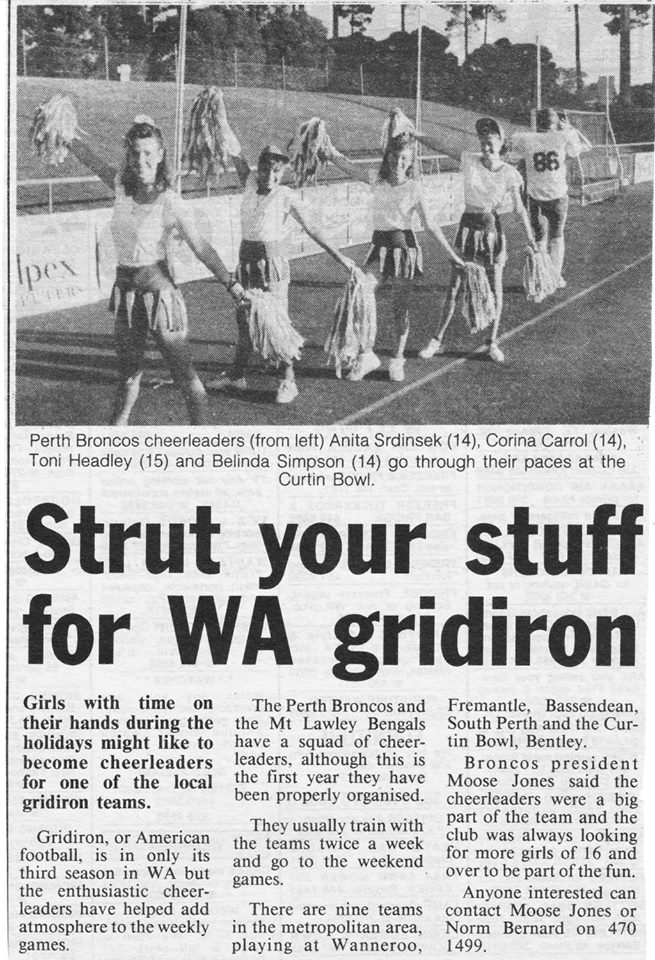 The Broncos joined the newly-formed Gridiron West league in 1994 alongside the South Perth Giants. The East Perth Vikings and Curtin Cowboys merged to form the Curtin Saints. The Wanneroo Bears were renamed the Joondalup Bears and the Rockingham Dolphins and Southside Hurricanes were formed.

The first time the Broncos took the field in a Gridiron West Grand Final was on 21 December 1996, and only just missed out on a championship 1-0 to the Curtin Saints. Shortly after the Broncos moved training to Ashfield Reserve.

With the WAGFL folding in 1996, the Southside Seahawks merged with the Rockingham Dolphins to become the Rockingham Vipers, the Westside Steelers joined Gridiron West and the Bunbury Raiders and West Coast Buccanneers were formed. The league finals were dubbed the “West Bowl”.

On 18 December 2004 the Broncos made the finals again, but lost 38-7 to the South Perth Giants at Houghton Park.

Gridiron West introduced a 7-a-side Under 19’s division in 2005 that would later become 9-a-side with five clubs fielding teams: the Broncos, Jets, Steelers, Vipers and newly-formed West Coast Wolverines. The Broncos Under 19’s Team missed out on making it all the way to the inaugural Under 19’s West Bowl, losing 18-8 to the Vipers in the semi-final on 10 December 2005 at Anniversary Park.

By 2006, the South Perth Giants had disbanded and later reformed as the Perth Blitz. 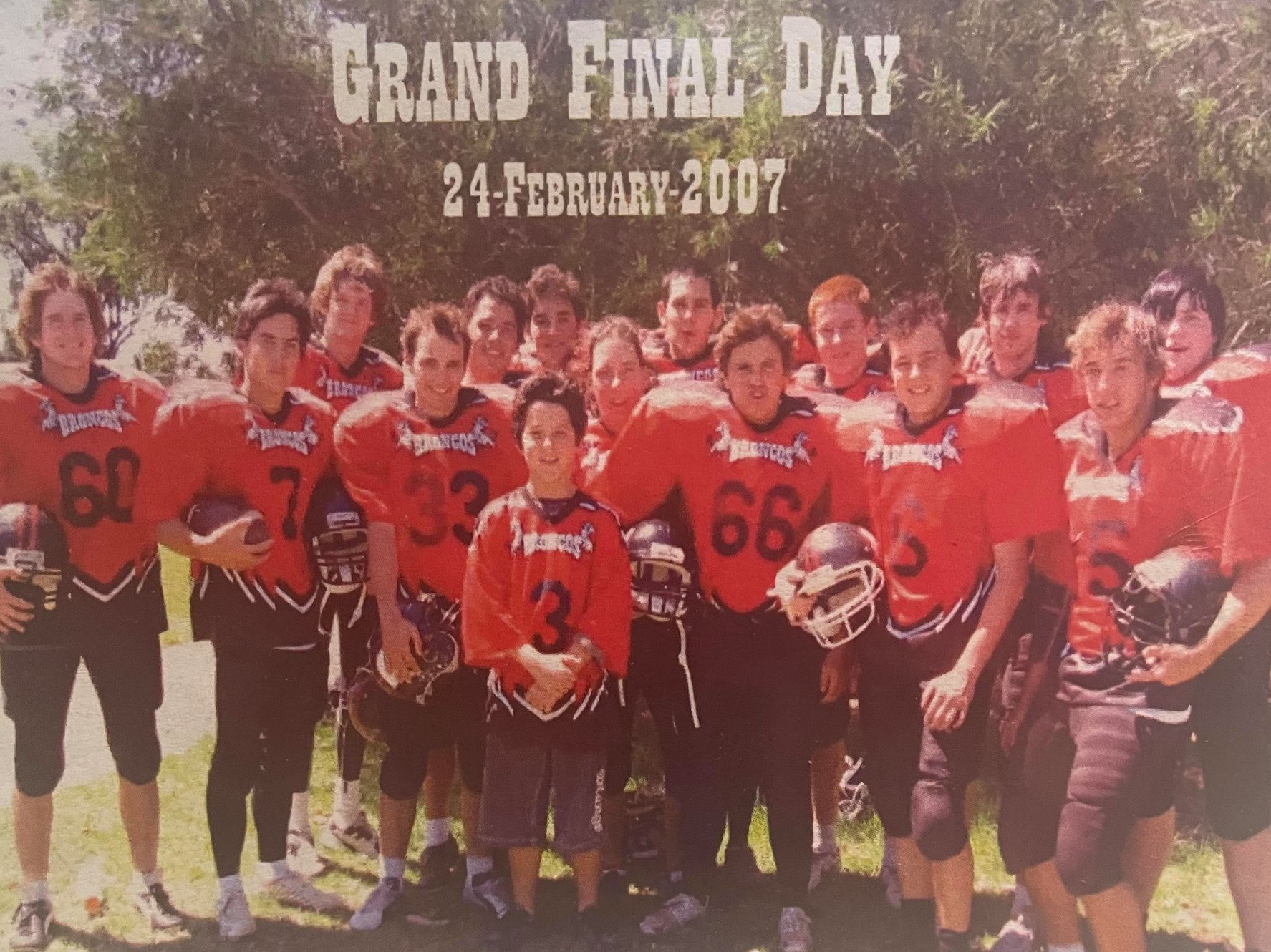 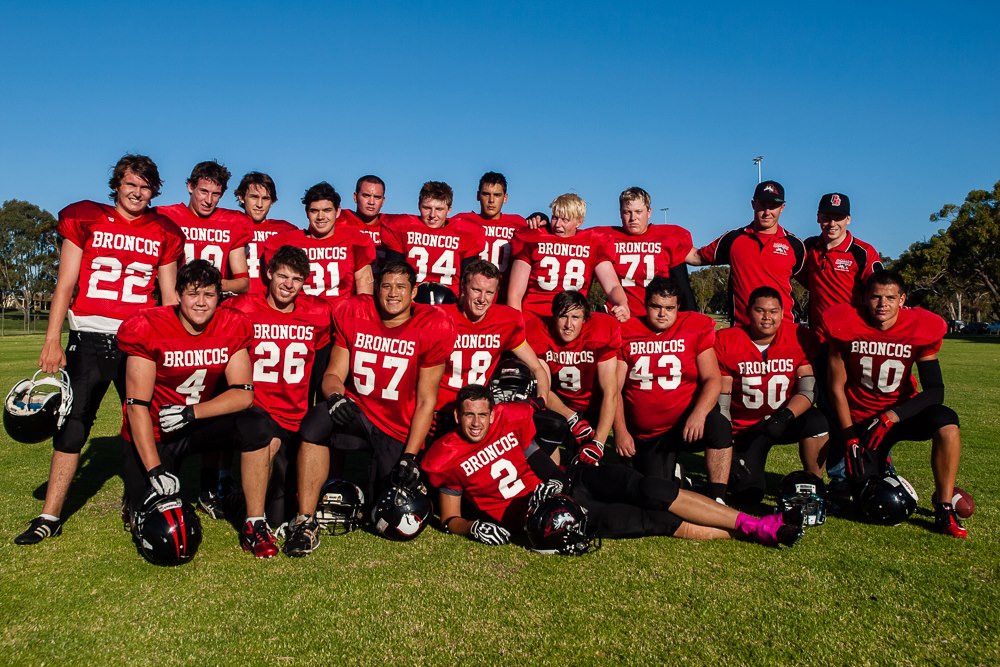 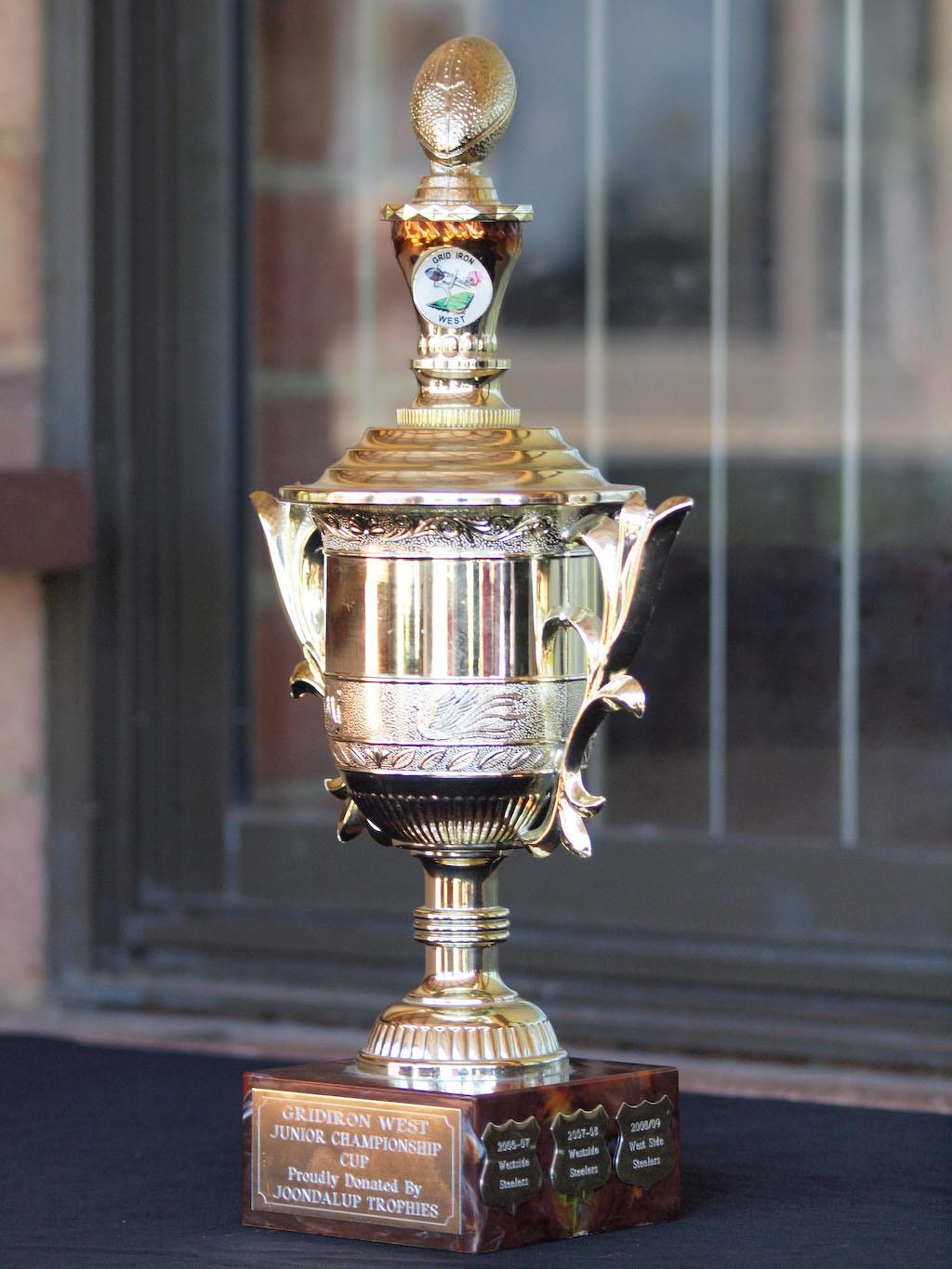 The newly-formed Gosnells Fire joined the Gridiron West competition and the season was extended to accomodate the additional games.

The Broncos defeated the Saints 50-14 in the semi-final on 2 February 2013 on their way to winning the final on 9 February 2013 28-26 against the Blitz at the Kingsway Sports Complex. In a season marred with injuries, and emerging victorious in spite of them, the unofficial club motto of ‘Get Shit Done’ or ‘GSD’ was born. 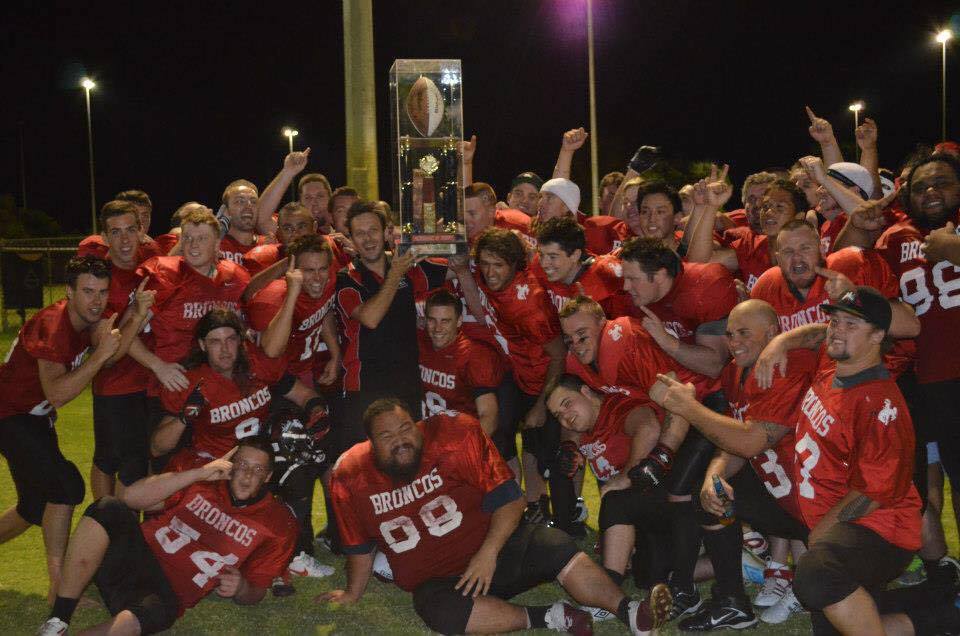 Highlights from the 2013 West Bowl 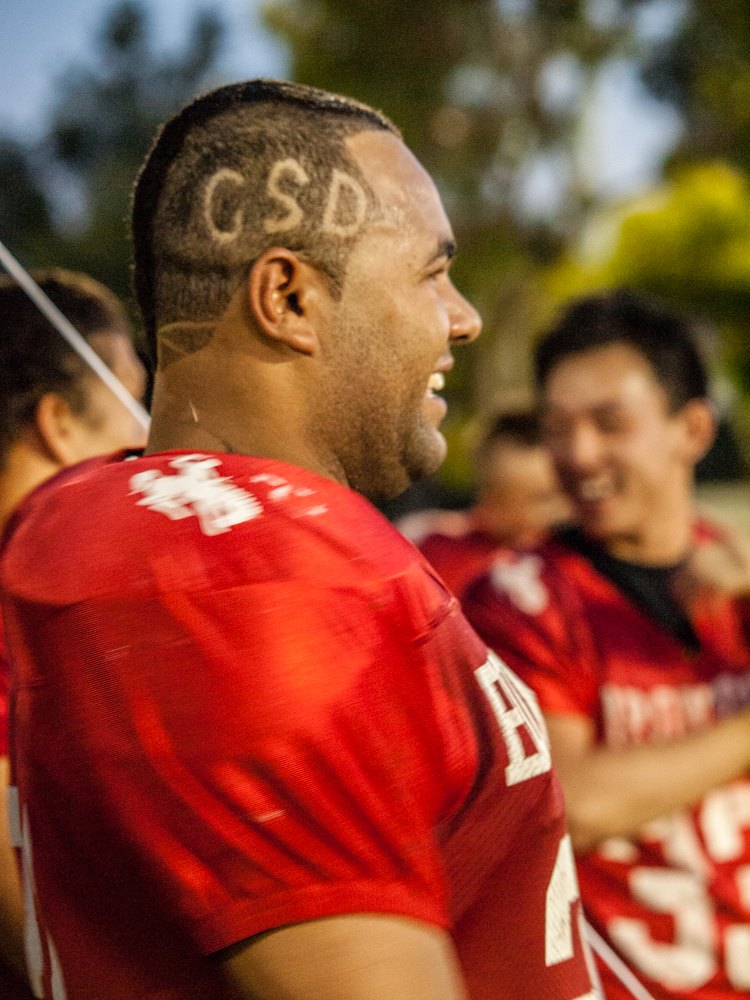 The Broncos moved into Houghton Park, Bayswater in August 2013. The new training grounds offered changerooms and upgraded floodlights, but was not available to be used for home games.

After finding a new home, the Broncos updated to a new playing strip in September 2014 and brand new designs for their supporter’s merchandise. 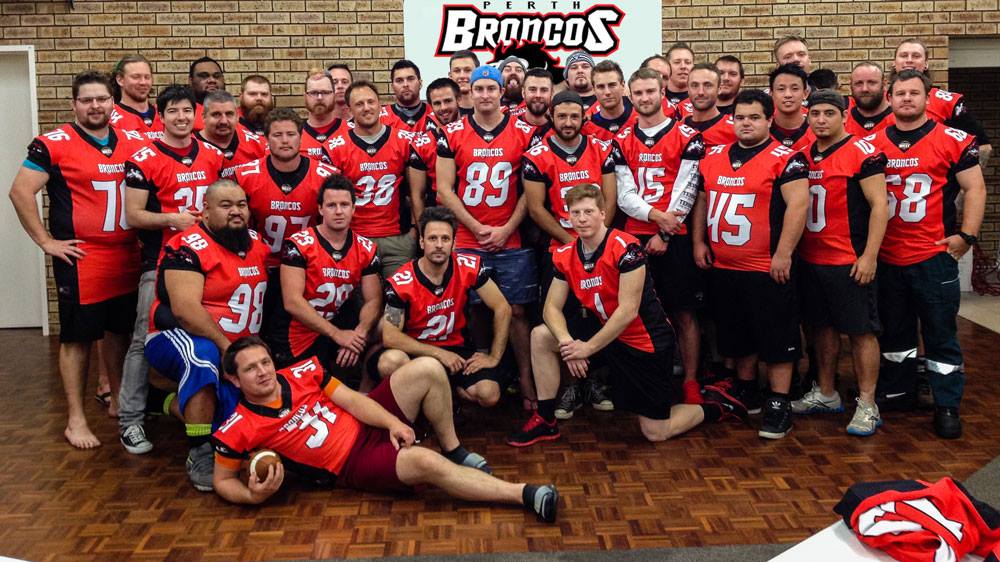 The Broncos made the Men’s West Bowl XXI on 13 February 2016, only to lose to the Rockingham Vipers 50-0 at Dorrien Gardens. 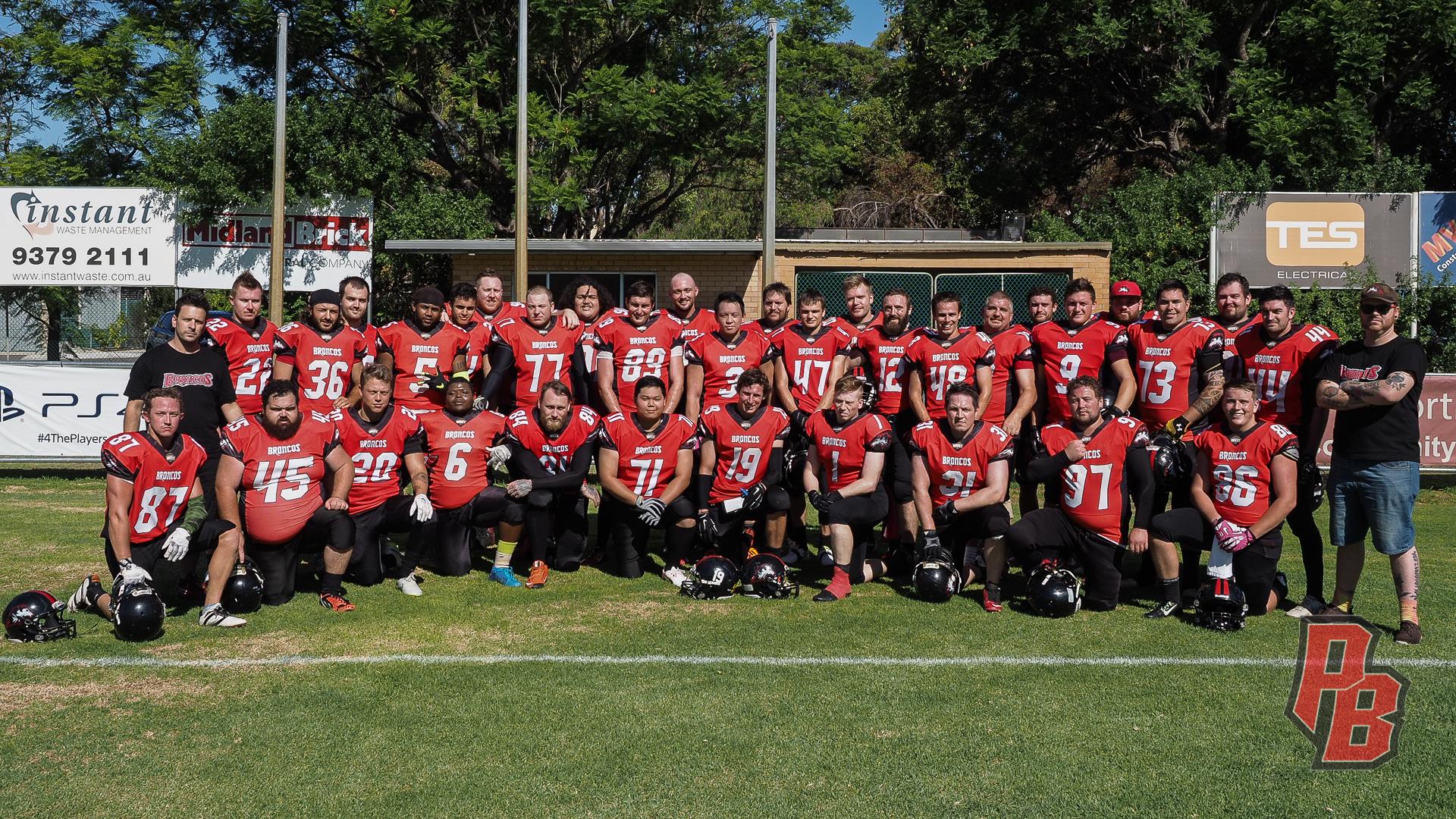 In 2017, Kellie Hopkins became the first Woman appointed to a club president role in Gridiron West at the Perth Broncos. Having played American football in the eastern states, she was also appointed the inaugural Women’s Director of Gridiron West and established a 9-a-side competition that included the Broncos, Blitz, Saints, Wolverines, and newly-formed Swan City Titans.

The Broncos Women’s team made it to the Women’s West Bowl I on 10 February 2018 only to lose 28-0 to the Blitz at Dorrien Gardens.

The Swan City Titans also entered a Men’s team that made it to the West Bowl in their inaugural year only to lose to the Rockingham Vipers 54-14. The Stirling Panthers were formed but failed to gain entry into the Gridiron West competition. 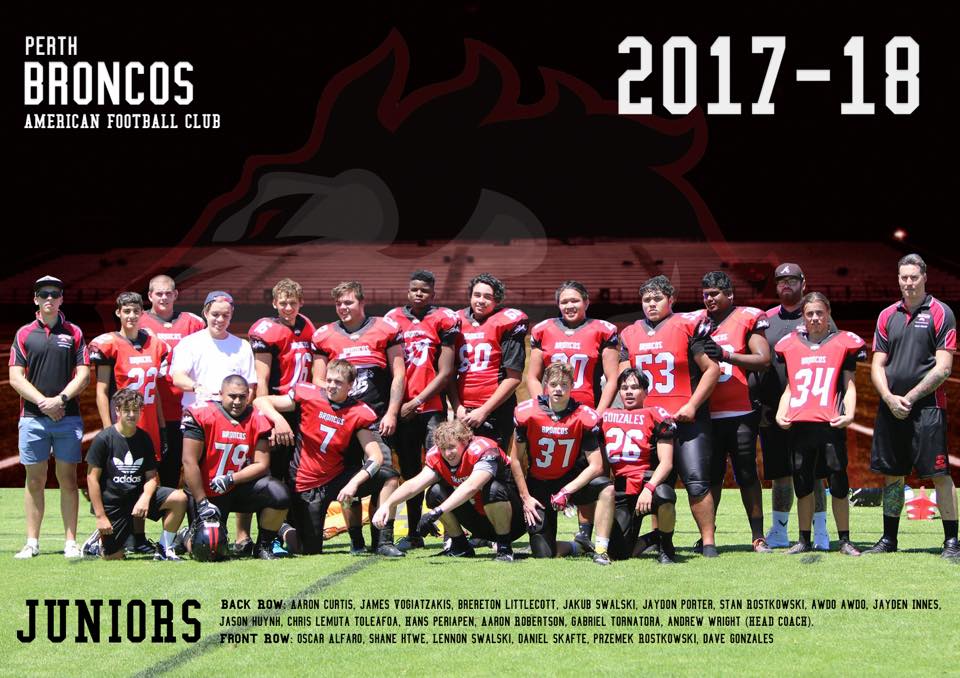 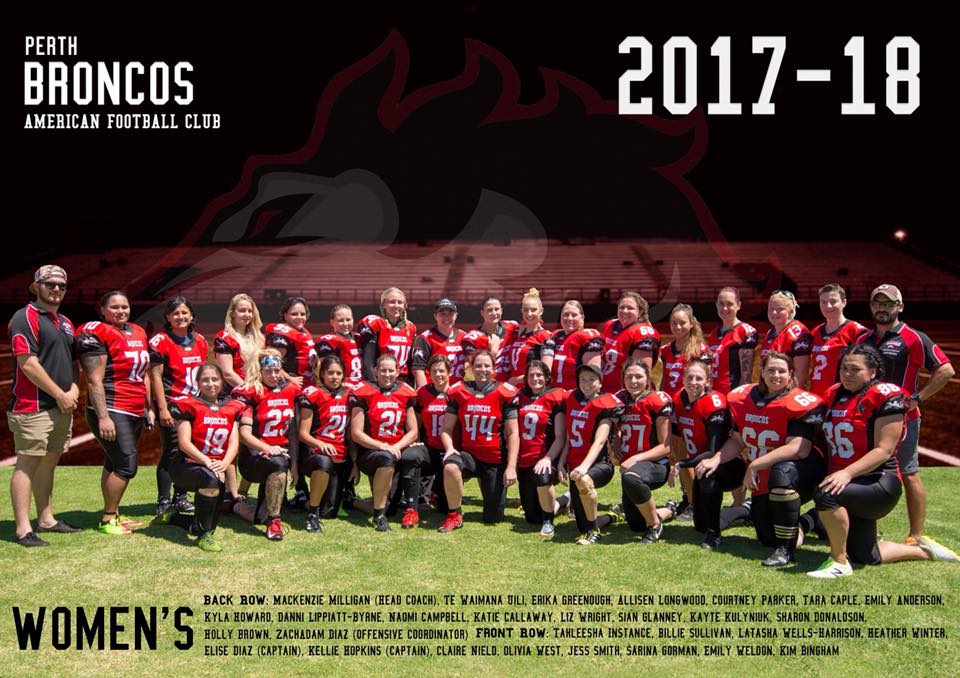 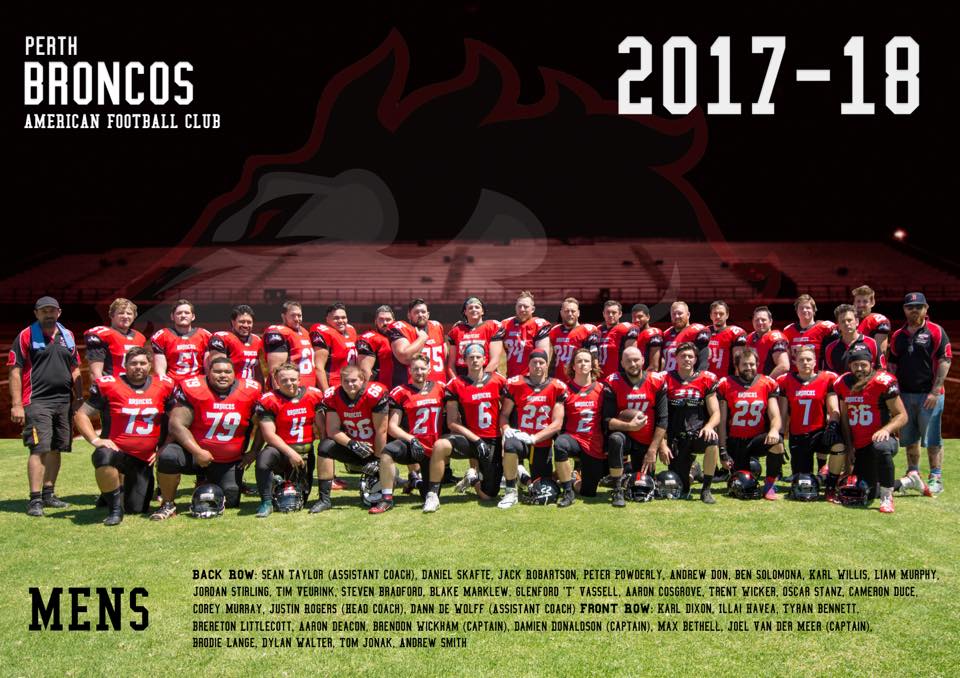 With a growing club, the Broncos moved into Lightning Park, Noranda in September 2018. The facilities allowed the Broncos to host home games with a club house, canteen and licensed bar, and to train under lights in the evenings. The Broncos rounded out the tenants of the Noranda Sporting Association alongside the Noranda Hawks Senior and Junior Australian Rules Football Clubs, and the Morley Eagles Teeball Club.

The Broncos hosted their first home game at Lightning Park against the Claremont Jets on 5 October 2018.

After defeating the new Viper’s Women’s team 12-6 in the semi finals at Edinburgh Oval, the Broncos faced the Blitz in a rematch of the previous year. The Broncos won the Women’s West Bowl II on 9 February 2019 defeating the Blitz 20-6 at Dorrien Gardens.

During the following off-season, the Broncos overhauled the clubs policies to reflect best practice in community sport and updated its Constitution to meet the requirements of the 2015 Associations Act.

The Broncos Alumni program was launched with members from over three decades of the club returning including inaugural club president Moose Jones and head coach Norm Bernard. This was the first program of its kind in Gridiron West bringing back over players and administrators to guide and participate in the club’s future. With assistance from the alumni, the Broncos began a project to chronicle the history of American football in Western Australia. 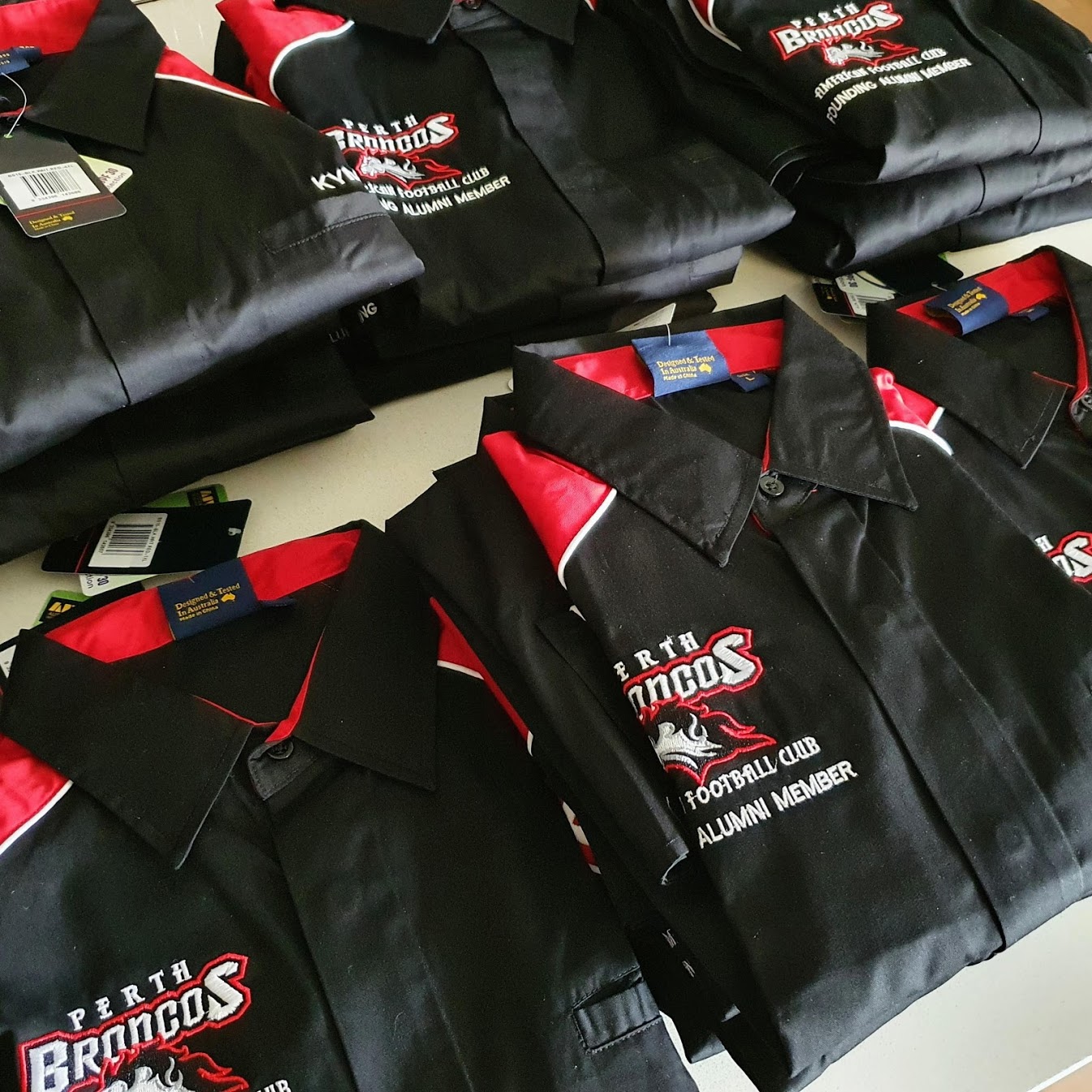 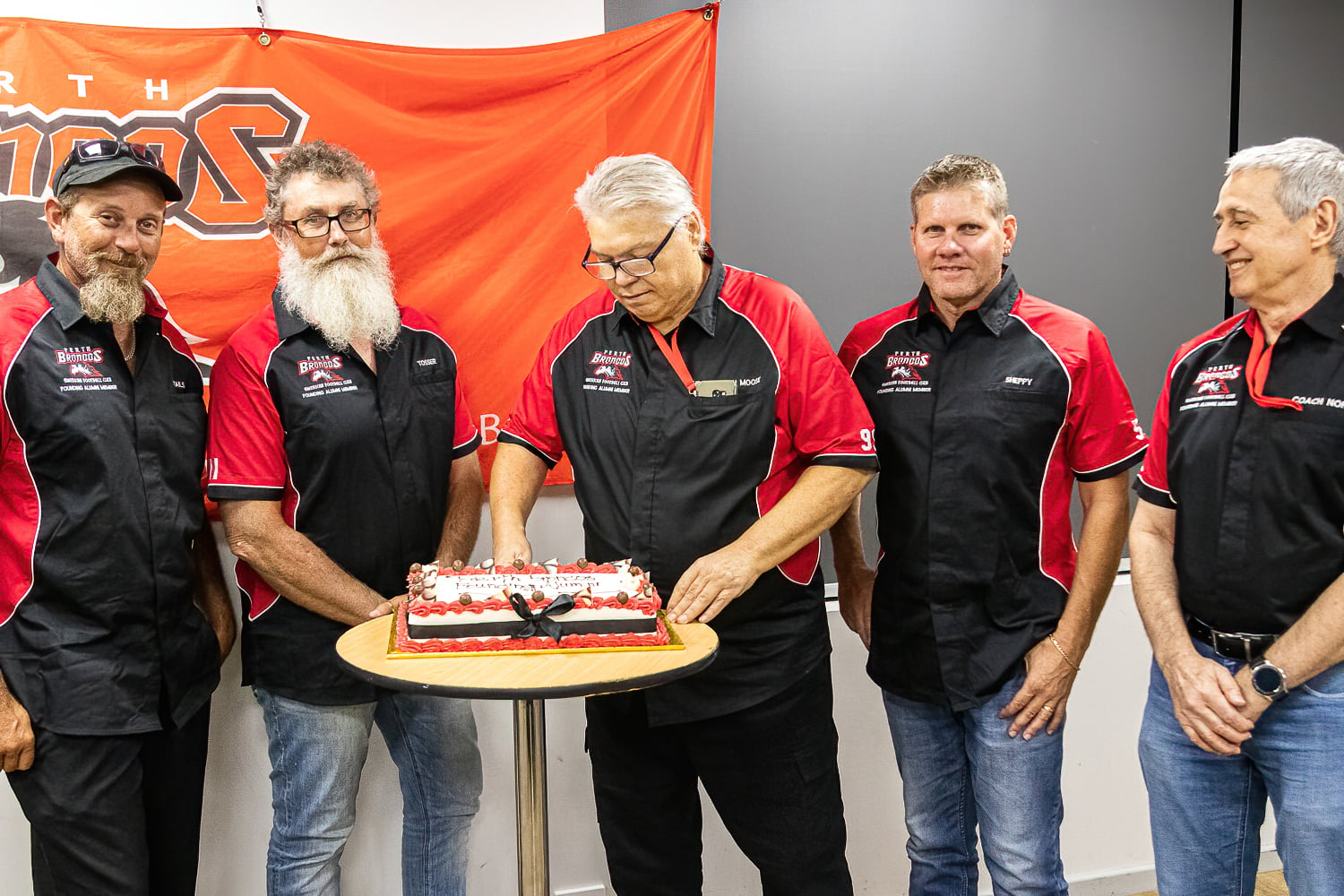 By now, COVID-19 had reached Western Australia and restrictions impacted participation in community sport. Lockdowns ensued during the off-season and there was a great deal of uncertainty if the season would go ahead. The Vincent City Ducks emerged fielding a Men’s team with players from the Westside Steelers and Perth Blitz. Due to low numbers, the Blitz were forced to merge with the Claremont Jets for the season to form the Thunderbirds.

Facing uncertainty, the Broncos took the drastic measure of reducing membership fees by $100 per player to ensure that members financially impacted by COVID job losses could afford to participate. Despite low participation numbers across all clubs, the Perth Broncos reached a record-breaking 140 members. The deficit in membership fees was made up by an expansion in the clubs fundraising through merchandise.

The Broncos were the first club in Gridiron West to live-stream games on their website, an initiative borne to combat the inability of interstate and international friends and family to attend games in person. 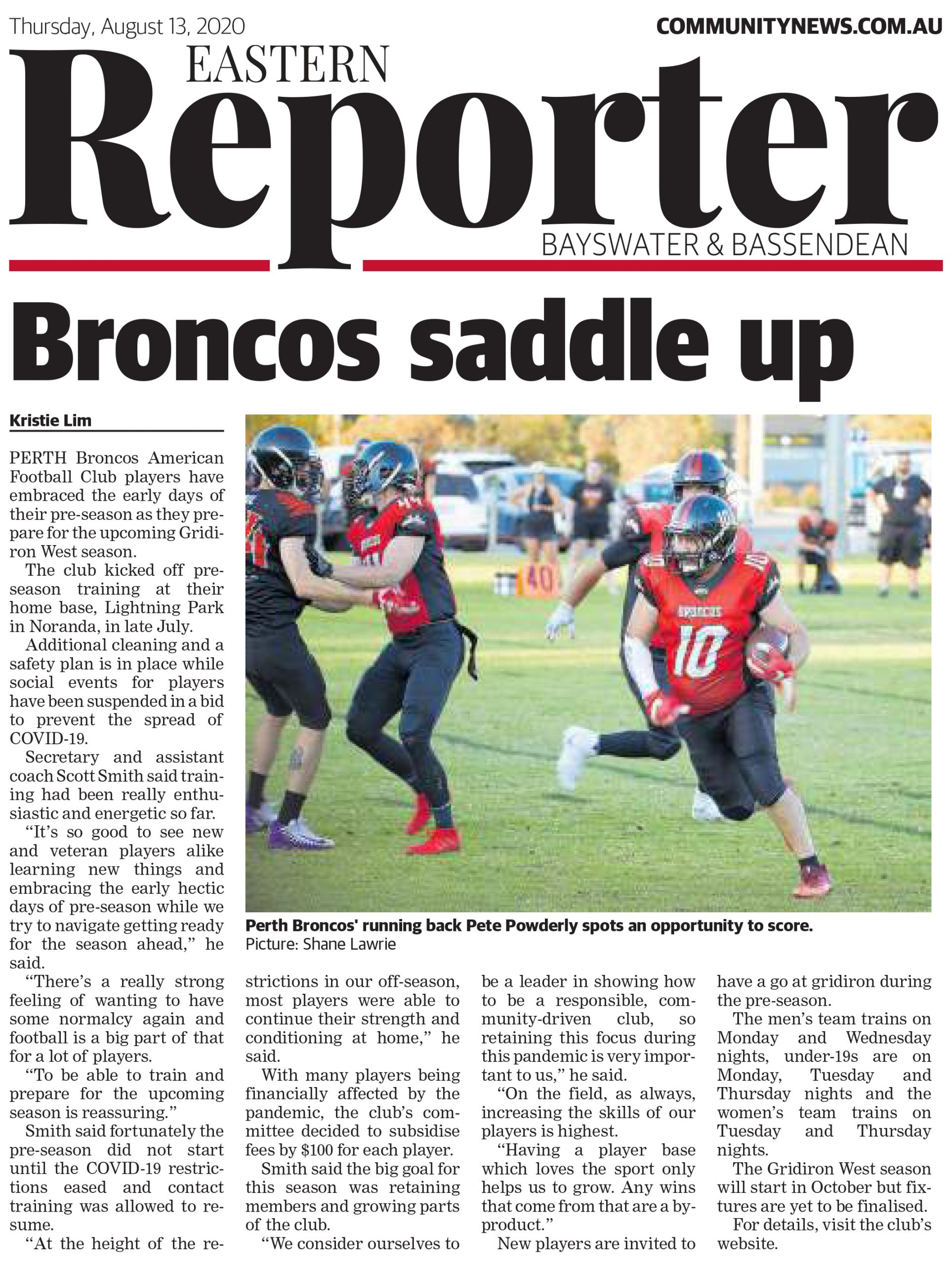 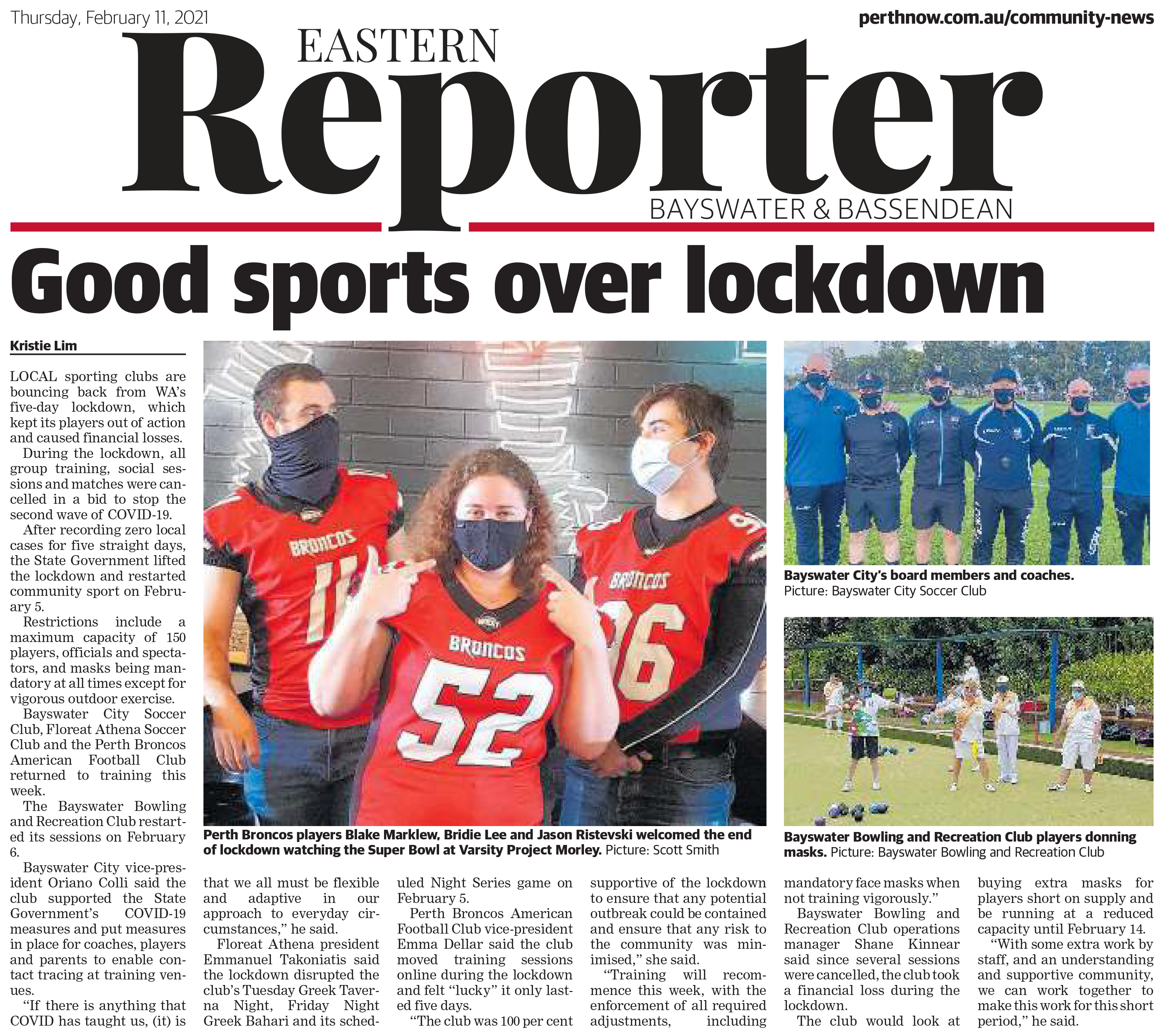 The Broncos also broke new ground appointing the first Women’s coaching staff in Gridiron West. Kellie Hopkins was appointed as the head coach of the Women’s team with assistant coaches Allisen Longwood and Laura Ng. The team made it to Women’s West Bowl IV and narrowly lost to the Rockingham Vipers 16-14 in the closing minutes of the game.

In a year that focused heavily on building the Women’s team, the first professional creche program in Gridiron West was established with the Broncos providing subsidised child care at the club on game days. 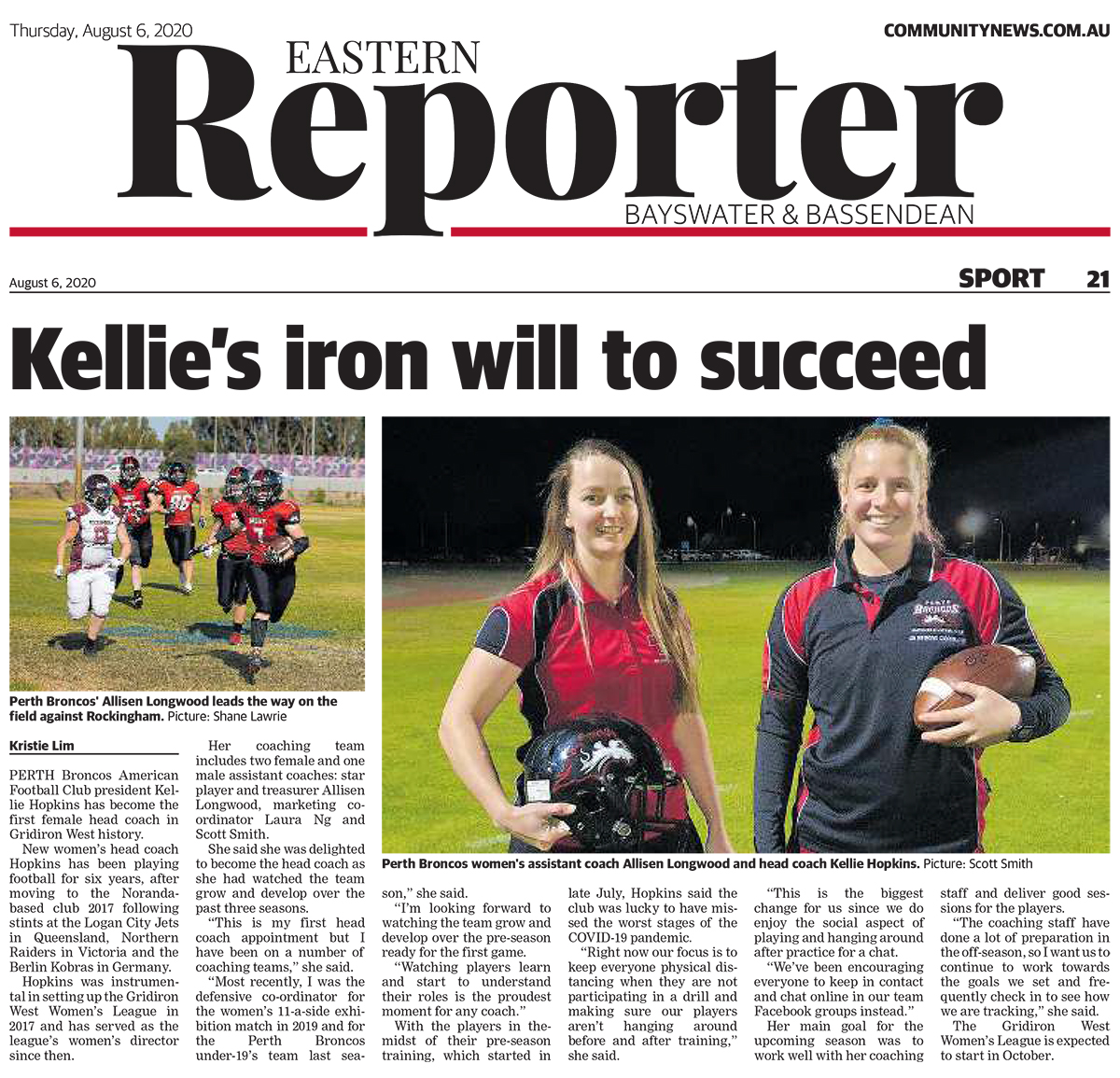 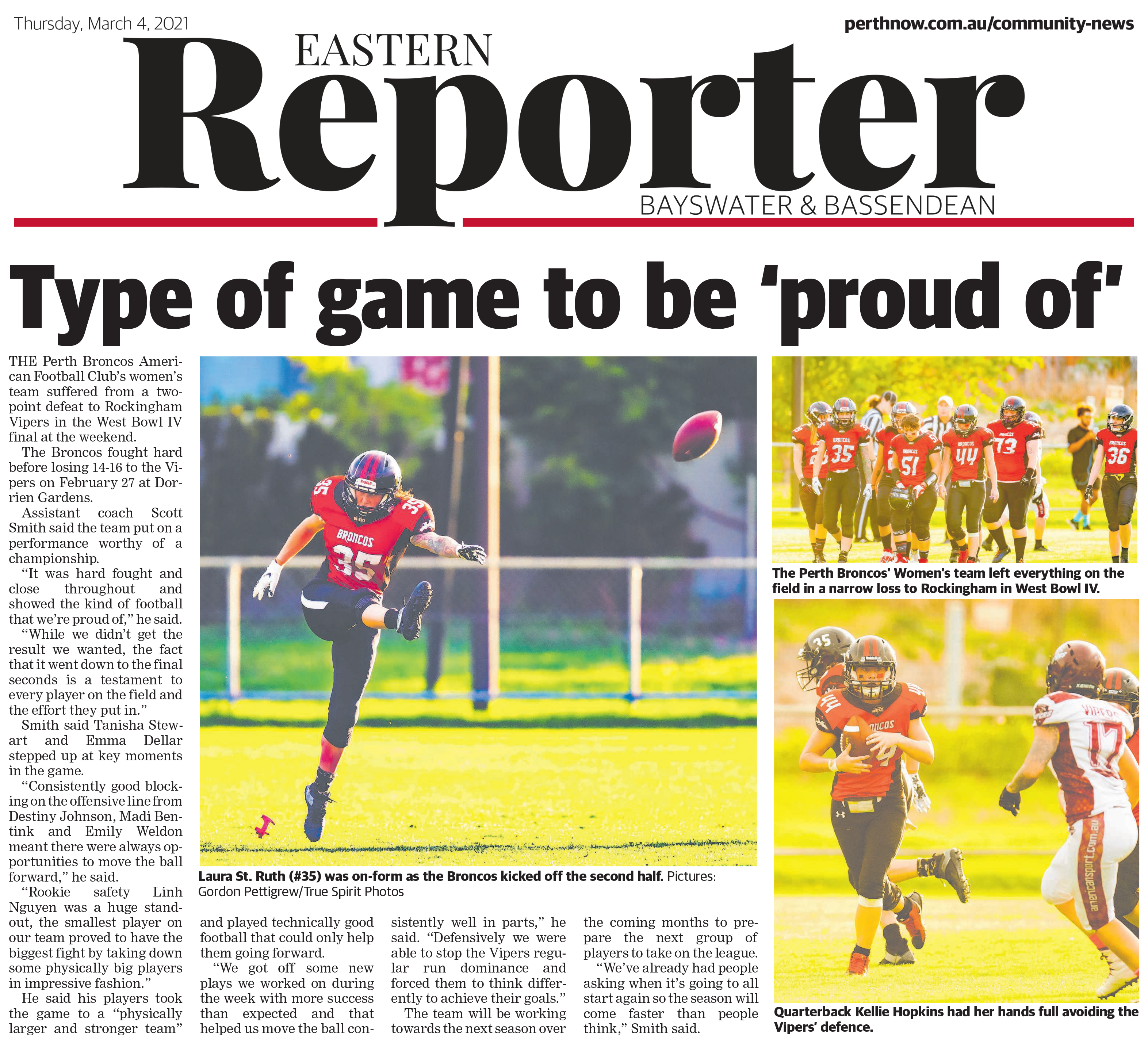